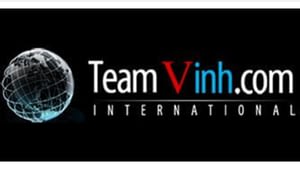 At this point, you might have already immersed yourself in most of our articles pertaining to making legit money online. If you are new to the whole concept of making money online, or figuring out which opportunity that will fit you best, our site will most definitely be a great starting point for you. At the same time, we do our best to keep you aware of money-making opportunities that might not be as legit as you think, and could turn out to be flat out scams.

We do this not just to protect you from getting scammed, but also to save you time and unnecessary frustration. With this review, we’ll be taking a look at a money-making opportunity known as “Team Vinh”. After investigating this program, we have plenty to say about it. Is it a legit opportunity? Or is “Team Vinh” another one of those online scams that you need to avoid and stay away from? Let’s dive in and report to you our findings.

What Is Team Vinh?

“Team Vinh” is a company that is also known as “Team Vinh International”. The company was founded in Singapore, by Vinh H. Le, and is said to have began it’s operations in 2012. From what we gathered, “Team Vinh” is said to also be a multi-level marketing company (or MLM).

They’ve outlined the way they operate too. They operate by first selling products, and second recruiting people to sell they’re products, all while recruiting new people to join and repeat the same process. With that said, “Team Vinh’s” process is most definitely the standard operation of how a multi-level marketing company operates.

How “Team Vinh” Claims To Work?

Based on what we’ve dug up, the whole “how it works” thing seems pretty vague. We were able to track down a video and a 3 page PDF riddled with FAQs, that are very hard to understand. These so-called FAQs are poorly written and seem like nothing but word salad. We find that to be a huge red flag. We don’t know what point they are trying to get across. Plus, they put up some kind of excuse to disclose some information, to prevent “informational overload”. Come on now, people have a right to know what’s in it for them when they join.

Another one of the FAQs that we discovered pertains to “leads”. “Team Vinh” claims that they don’t need your “leads” because they’re already doing some kind of heavy lifting. Obviously, they want you to sign up if you really want all of your questions answered. Now you do register for free. However, you’ll need to enter some personal information that you might not want to reveal.

Information like your telephone number. But thankfully a burner “VOIP” number can come in handy and be used in cases like this. We recommend this because after providing this information, there will be companies that will spam the crap out of you with different advertisements thru calling and texting you. Once you sign up, you are then transported to they’re dashboard. At this point, it’s basically asking you whether or not you really want to join “Team Vinh”, as if just signing up to they’re website isn’t good enough?

Next, you’re supposed to purchase this thing known as a “VPAK”. Once you have purchased it, you get 1 PE or (personally enrolled) credit. From there, your “VPAK” will be used for PE’s that your downline will generate (should you recruit other people). Then you’ll be “eligible” to take part in some income multiplier programs. And you’ll supposedly rise in ranking, if you were to purchase more “VPAK” (and more referrals).

From there, you’re now in the process of selling what might be third-party MLM products. So they are not direct products from “Team Vinh”, but rather from other MLM companies. That’s another red flag right there (a HUGE one). Selling other MLM products, while they don’t seem to have any other program of their own to sell. 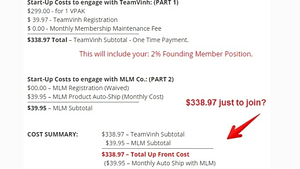 How Much Does “Team Vinh” Cost?

There are two segments to the whole price thing, when joining “Team Vinh” . The first one comprises of your one “VPAK”, which will cost you about $300. Then you pay a registration fee of $39.97 on top of that. The second segment will tack on another $39.95 for your MLM product auto shipping. This all will come to a grand total of a little less than $380.

And guess what? There is no money-back guarantee included either. They even said it on their website. You know for a fact that it’s a black hole where so much money goes down. Count that as yet another red flag. You’re basically spending nearly $400 on some kind of crappy MLM product, that might as well be taken out back, and put out of it’s crazy misery.

The Pros of “Team Vinh”:

Here are a few pro’s we were able to dig up, concerning “Team Vinh”:

Other Red Flags We’ve Discovered About “Team Vinh”, Besides What We’ve Already Stated:

As we’ve mentioned earlier, MLMs are not the best money-making opportunities to consider. Especially when starting off making money online. But don’t let that discourage you. We know a ton of legitimate ways where you can make money online, without having to hassle friends, family, or strangers. As you probably might have noticed, we have plenty of articles on how you can go about perusing that option. Feel free to look around this website and read a few of our reviews for yourself. You can find opportunities like freelancing, survey taking, and so much more. Trust us when it comes down to being experts in being able to sniff out a scam from a mile away.

Our Final Verdict For “Team Vinh”:

In the case of whether or not “Team Vinh” is a scam or a legitimate opportunity, it’s a scam. Sorry to break your heart. While we are pretty subjective with our declarations, we’re just using our better judgment. Are all MLMs scams? Not really. But a lot of them are quite risky, and you will lose money more so than making it. It’s unclear as to whether or not “Team Vinh” still operates or not. But given the fact that they have received plenty of negative slack, and have been struggling with legal issues, we wouldn’t be surprised if they are no longer in business. Point blank, end of discussion..

If so, great! Please feel free to leave your comments below in the comment section, and we would be more than happy to get back with you. Thanks again for reading this post, and good luck with all your success online..

Also, if you enjoyed reading and educating yourself on “Team Vinh”, please don’t limit yourself. Feel free to read and learn (from one of our other reviews), “all about” a different scam online business that should be avoided like:

2 thoughts on “Team Vinh – Is This Program A Scam Or Is It Really Legit?”